Followers of our story will recall that Sue Black sent the sternum (breast) bone from the remains of the young lady that we found in Simon the Fox’s coffin to Dr. Ceiridwen Edwards, Senior Research Fellow in Archaeogenetics at the University of Huddersfield, to see if she could recover DNA. Even though this was the bone in the best condition from the coffin, it was still in a very poor state of preservation, as were the other remaining bones. This was due to chemical reactions from microbes in the body, the lead, timber and fabric of the coffin, and also the air, given that the coffin had been forced open, possibly in the hunt for jewellery or physical souvenirs of Lord Lovat. Fear of such souvenir hunters may explain why there are reports of the skull being removed from the coffin and placed in a separate wooden box in the crypt. The box is reported as late as the 1960’s but has since been lost.

Ceiridwen has been unable (so far) to obtain a viable DNA sample but she sent a small sample of bone to Dr. Peter Ditchfield, Stable Isotope Laboratory Manager at Oxford University, who has been able to look at the chemical analysis of the bone and determine the young lady’s diet and possible social position. Our skeleton appears to have eaten a moderate amount of animal protein (meat) and a minor amount of marine protein (fish/shellfish). There are very few analysed samples from other graves dating to the 18-19th century to compare the data with, but Peter found two; a population from the crypt of Christ Church in Spitalfields in London, and a population from the Naval Hospital Burial Ground in Gosport, Hampshire, on the south coast of England. The Spitalfields area at this time was relatively affluent, with a diet that included a lot of meat and a moderate amount of seafood. The Gosport residents, in contrast, were on naval provisions, with less meat and little or no seafood. Our lady’s diet was nearer to that of the Spitalfields population.

One of our puzzles has been whether the lady was put into an empty coffin already present in the crypt at Wardlaw (which would mean that she is a local person, possibly a Fraser) or if she was put into the coffin in London, and then transported north to Wardlaw. From the research I have done to date, I am of the opinion that, as the government had originally agreed that he could be taken north to Wardlaw for burial, the coffin was made for Simon (presumably in London), with a nameplate that he probably dictated. The government then changed their minds and buried him at the Tower of London. The timber coffin was clad in a double layer of lead, as this would have made it easier to move a body a long distance in order that the contents didn’t seep out as the body decomposed. It would then have been placed inside a timber coffin, similar in style to modern coffins. Crucially the nameplate was attached to the top of the lead coffin and therefore not visible when the crypt was investigated in the 19th century to see if Simon the Fox was there. Over time the outer timer coffin (and those of the other coffins in the crypt) decayed, leaving the lead coffins we see today.

The clan story is that, after the execution, the body in the official coffin was swapped (who for?) and the coffin was brought home, as Simon had wanted. We now know that Simon was not in the coffin in our crypt. It is just possible that he came to Wardlaw and was then moved to an unmarked grave elsewhere in the graveyard once word got out that he was here when he shouldn’t be. This would leave a convenient empty coffin for the young lady to occupy. However, the more likely scenario is that Simon was buried in the chapel of the Tower of London, and his double lead-lined coffin brought north on the merchant ship ‘Pledger’ from Gravesend to Inverness, and placed in the crypt to reassure the clan that their chief was home. Could the young lady have been in the coffin from London and, if so, why? Her body would not have made a significant difference to the weight of the coffin to give it credibility as containing Simon, so could it have been a convenient way to dispose of a body many miles from the scene of a crime? If she was indeed a local person, especially a Fraser, why was she placed inside Simon’s coffin and not given one of her own?

Unfortunately, the isotope analysis undertaken by Peter is not able to say that she definitely came from an affluent area of London, like Spitalfields, just that she had a diet like someone from there. A person from a wealthy local family around Kirkhill (like the Frasers) may have had a similar diet, or perhaps she is someone that had spent a significant amount of time in London. It does suggest that she was not a person from a poor area, whether in Inverness or London, as she would not have been able to afford such a good diet. It is fascinating to get a glimpse of the life led by this young lady, and a testament to the skill of Dr. Ditchfield in recovering this information. Dr. Edwards is continuing in her quest to recover viable DNA from the bone sample as analytical techniques are improved and she may, in the future, be able to tell us more about this intriguing young lady. We are very grateful for the time and effort that both she and Peter are spending in trying to tell us something about her life and location.

I think Simon would be delighted that his story continues to raise questions so long after he parted with this life, and his head! I wonder what the young lady would think about the work being expended on her remains, giving her a prominence in death she possibly never had while she was living. 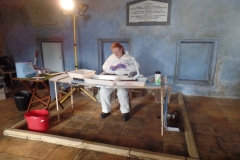 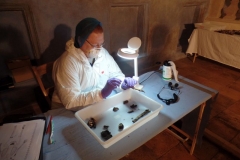 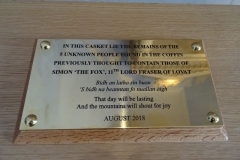 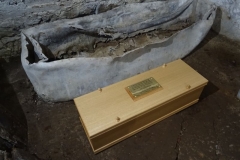